Well, it’s official…my oldest daughter is a college student!  We ALL survived the college move in day last week.  Just a few tears were shed…and not all by me.  It will be a time of adjustment for our family (Audrey included), but I feel good about where she is and the care she will receive while at Furman University.

The weeks leading up to her departure were filled with buying items for her dorm room, packing, and just trying to squeeze in as much quality time together as possible.

Her birthday is the beginning of September, and I’m so sad that it will be the first one that I won’t be with her to celebrate…so I planned an early birthday/ college sendoff celebration for her and our family the weekend before she left for college.

Before we left for dinner at a local restaurant that she has been wanting to go to for a while, I surprised her with six presents.  What she didn’t know was that each gift represented a letter to spell FURMAN.  It took her a bit to figure that out.  The first two presents that she opened were the A and the U…she thought we were spelling her name!

Of course the gifts were wrapped in Furman colors…purple and white.  Inside each box or bag was a clue as to what she was about to open.  Once the gift was revealed, there was another piece of card stock with a letter on it…those letters eventually spelled out FURMAN. 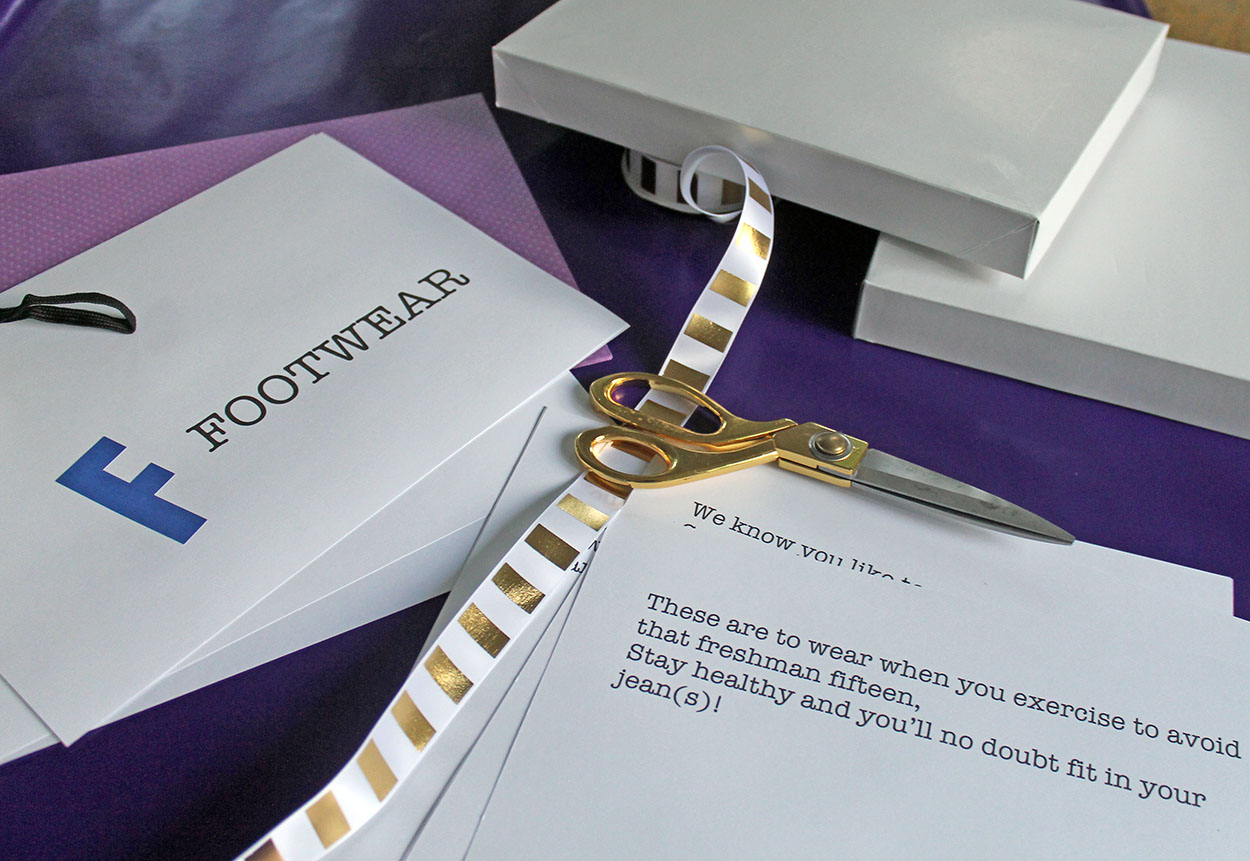 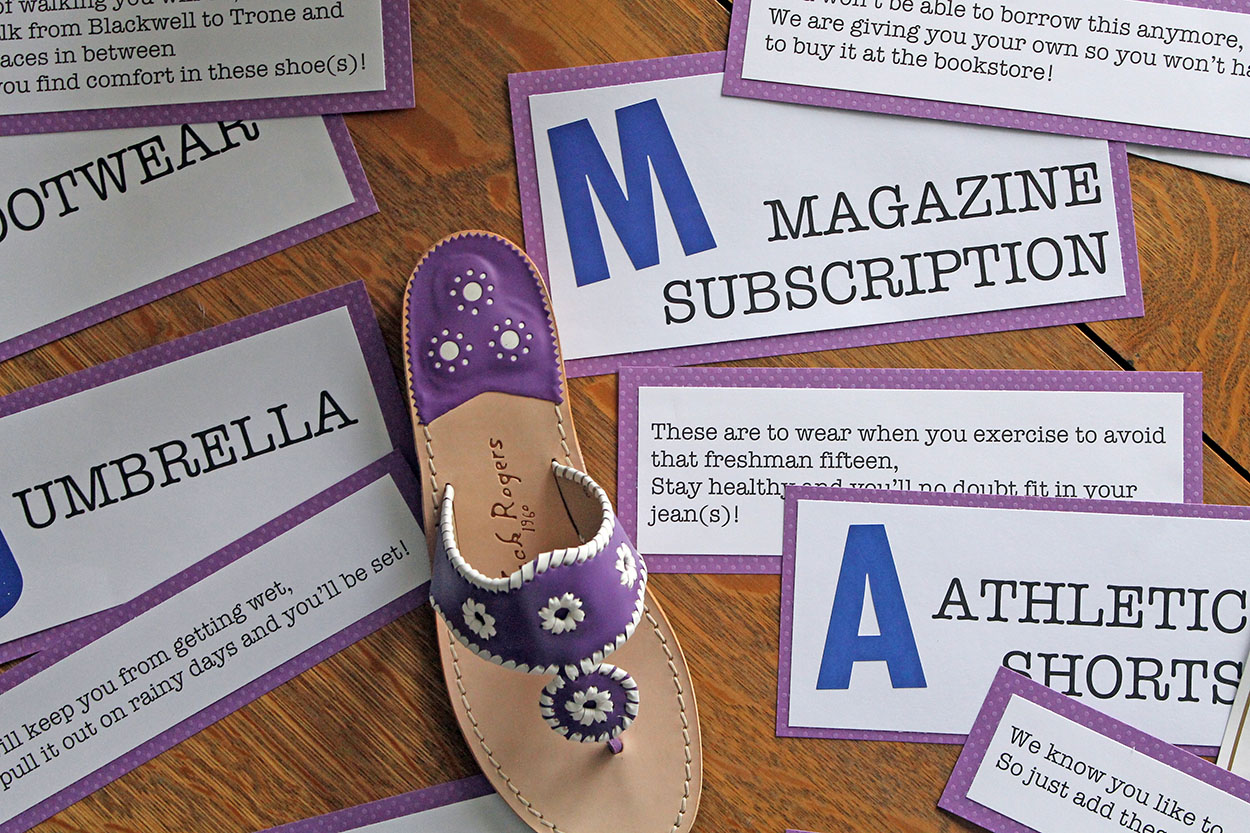 She opened them in random order, but I’ll share them in F U R M A N order…

F is for FOOTWEAR.  She had asked for these boots earlier this summer, and I think she was truly surprised when she opened them.  It was the last gift she opened, too…it was fun to see her excitement! 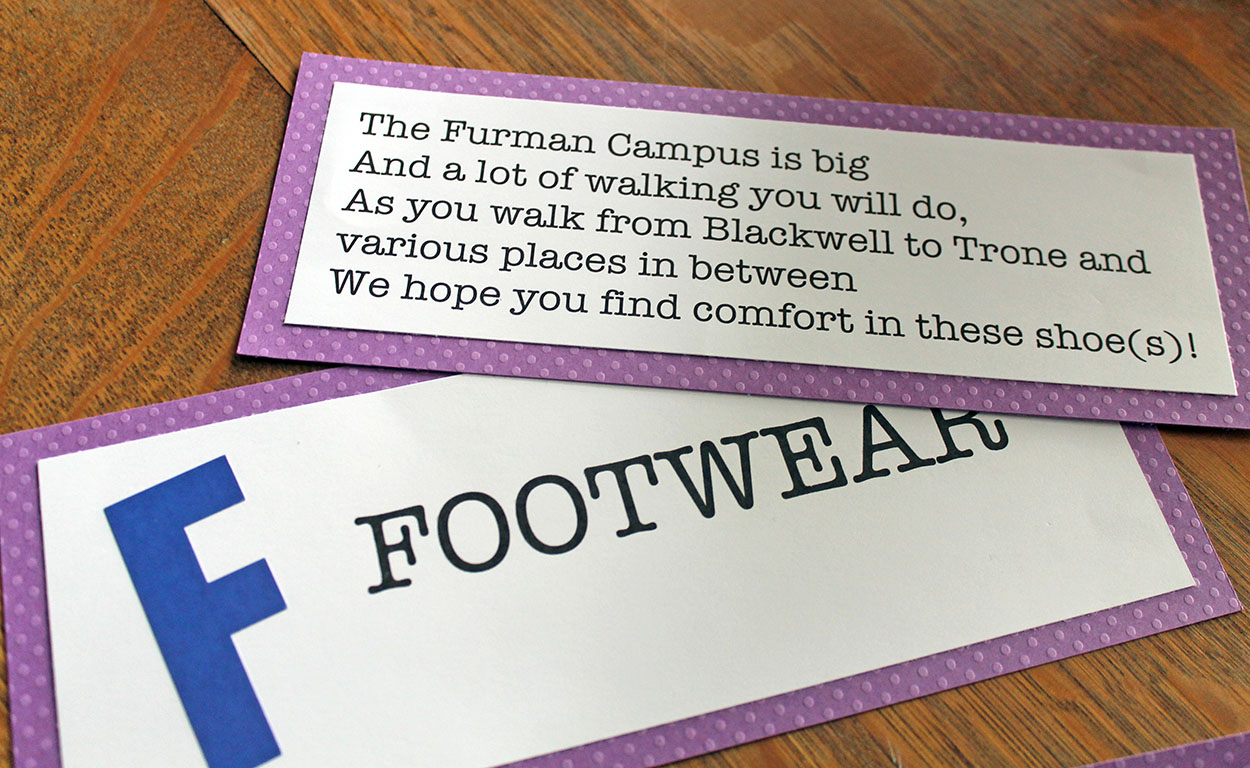 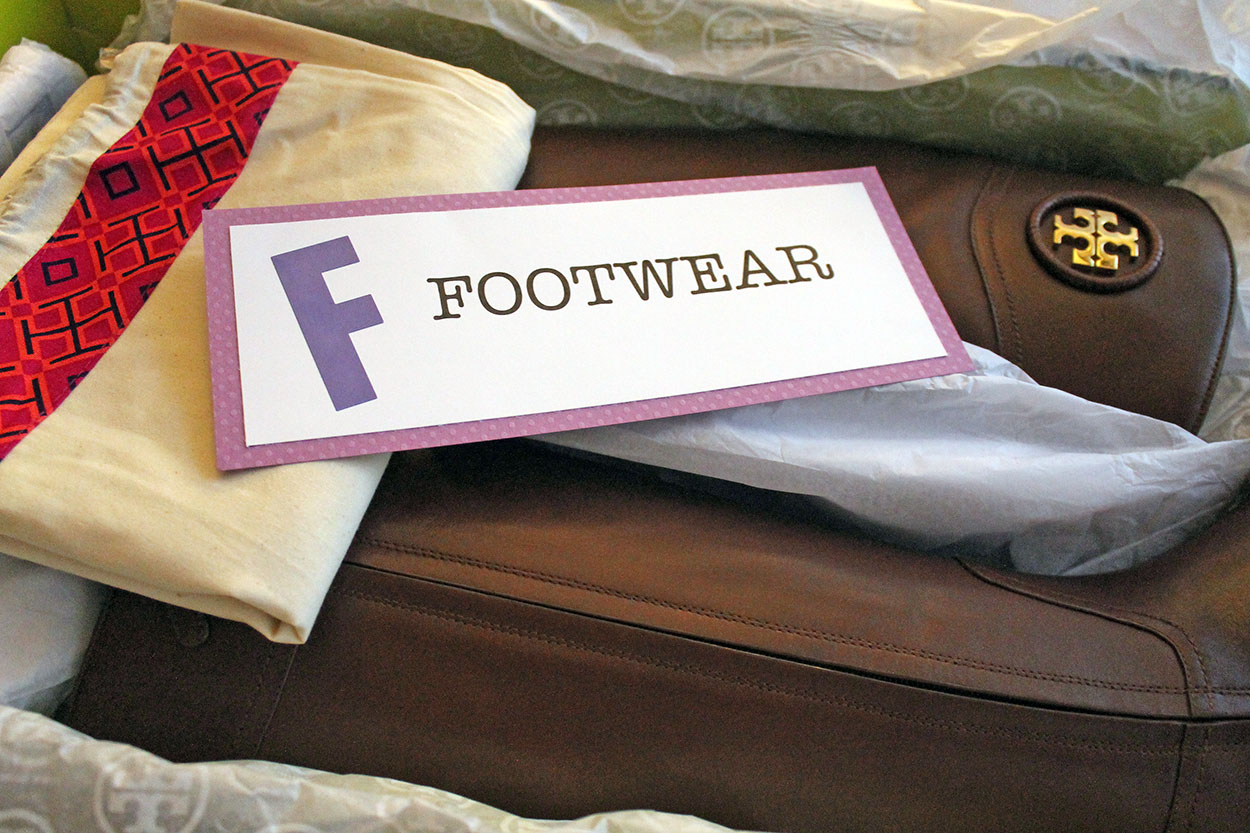 U is for umbrella.  I love this small one that I had monogrammed in her college colors…perfect for throwing in her backpack on those rainy days!

R is for Rogers…Jack Rogers sandals.  I know, I took some liberty with the alphabet here.  I really wanted to have a custom pair made for her in her school colors, so I worked it in there.  Aren’t they super cute and so southern? 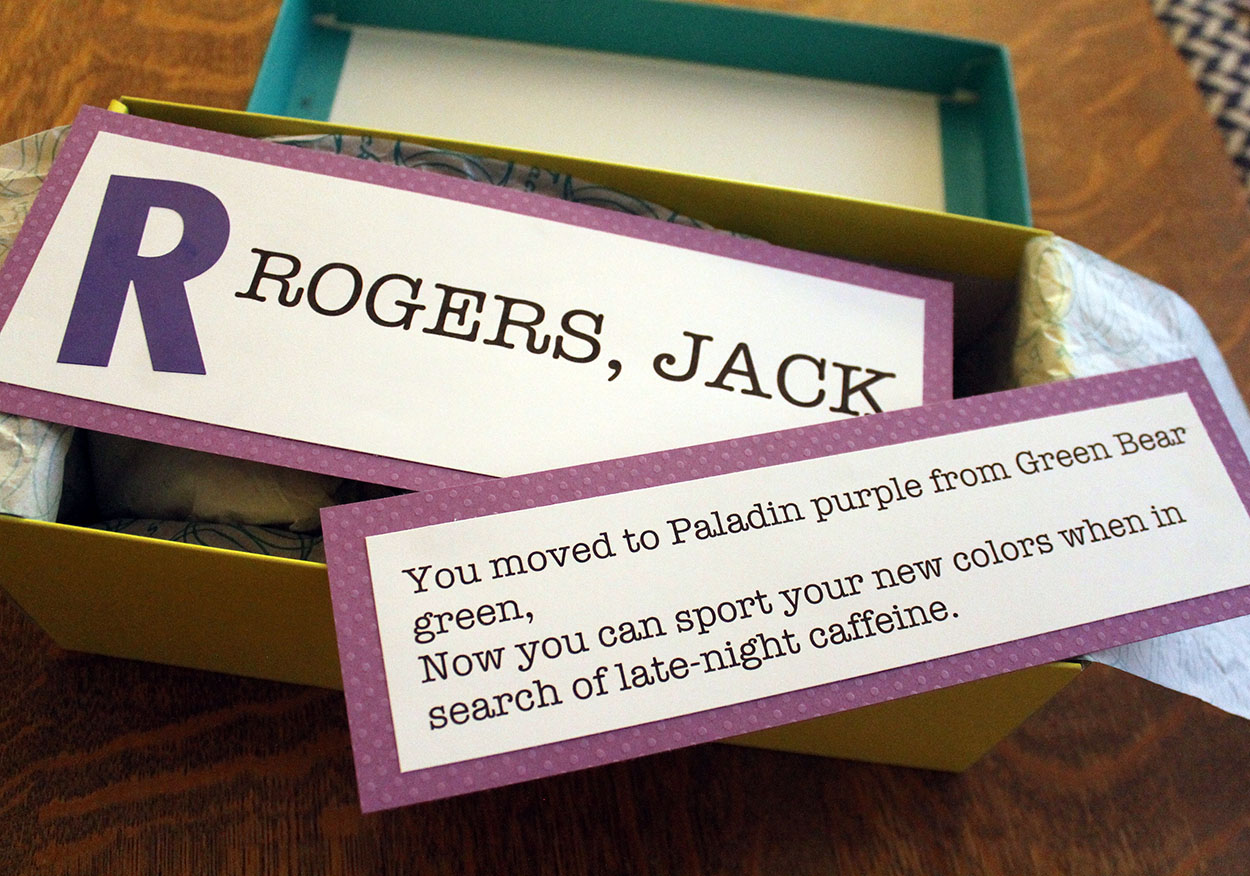 M is for magazine subscription.  This girl snags my People magazine when it comes in the mail every week before I can even read it!  I know she will miss reading it, and it’s always fun to receive mail…so now she has her own subscription being sent to her at college.

A is for athletic shorts.  She’s looking forward to biking and walking the paths around the university, as well as checking out the physical activities center.

N is for notepads.  What college student doesn’t need them for their desk! 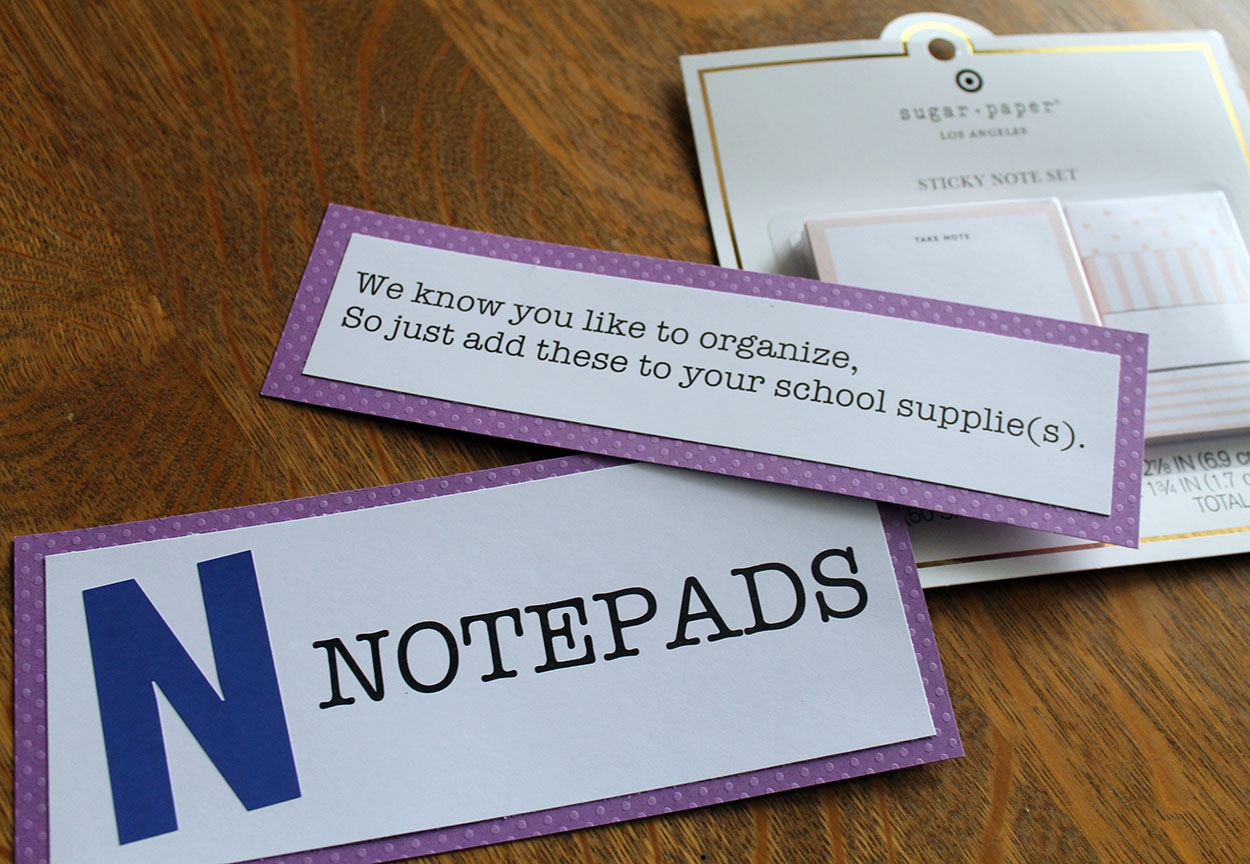 My rhyming skills may not be the best, but I know Audrey appreciated my efforts (and the presents).  It was a special night for our family to be together before she began her new adventure…college!

And I’m so glad Furman is just SIX letters!

View Open
This picture of Phillip and Claire deserves a post

View Open
I’m putting together a team. Let me know if you

View Open
I had another cancer ver-sary celebration on Sunda

More Follow
This error message is only visible to WordPress admins


Error: API requests are being delayed. New posts will not be retrieved for at least 5 minutes.